I recently brewed a coffee blonde ale and it was quite the hit with my homebrew club and friends so I decided to share the recipe in the form of a blog post. The coffee was only added to half of the batch so I only netted about 2.5 gallons. The 1/2 keg kicked in under a week, so it must be good. 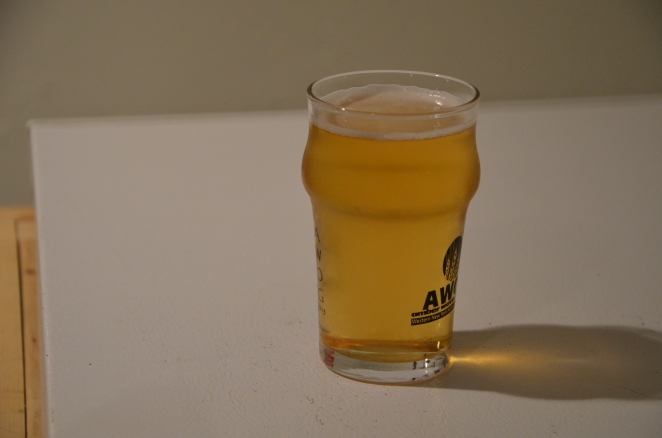 One of the most memorable beers I tried on my honeymoon in Denver was a pale coffee beer by Former Future. They took their regular Countinghouse Cream Ale and infused coffee (I think through cold brewed coffee). As you can see in this picture the middle beer had a gold colour, but with fantastic coffee aromatics. I had also previously read a blog post by The Mad Fermentationist on his coffee blonde. With these two sources of inspiration I set off on my quest to craft a pale coffee beer.

In my opinion all specialty beers are about striking the right balance between the base beer and the specialty ingredient. For this beer I wanted something visually deceiving that surprised the drinker with unexpected coffee flavour and aroma. I took inspiration from TMF and decided to “dry bean” the beer in the fermenter after primary was finished. I was hoping this would lend minimal colour from the beans but still extract a reasonable amount of flavour and aroma. I wasn’t sure at first which variety of coffee to pick. My friend Craig had been having great success with Kona Fancy from Cultured Coffee Bean in his stouts so I decided to go with that since I liked the quality of the coffee aroma he had been getting in his beers. I decided that the base beer should be a blonde for two reasons. I wanted a very pale base beer that I could still ferment as an ale, and also because I haven’t been very successful in the past in my two attempts at brewing blonde ale. Both times my blonde ales I have had a strange flavour I haven’t been able to place. Some people have said DMS, but it doesn’t resonate like that to me. 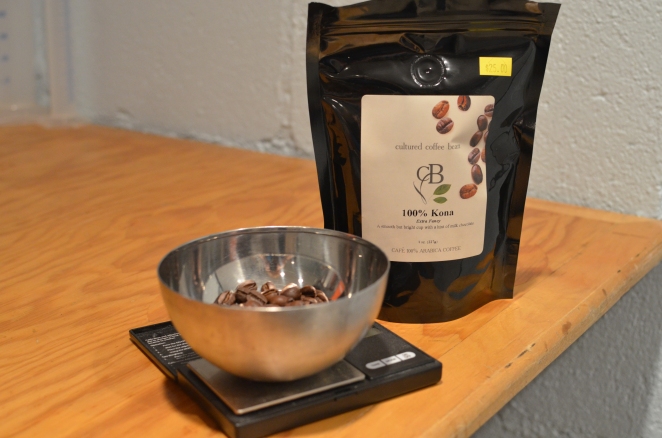 In an effort to clean up the base beer I decided to extend the boil out to 90 minutes (even though the base malt was 2 row), and to increase the pitching rate to hybrid level (1 million cells per mL per °P). I took some queues from TMF and added oats to my grain bill for body, some vienna was also added for the bready malt character. My usual WLP090 clean ale yeast was used, and hops only for bittering in the form on magnum. I went with a neutral water profile, Calcium just over 50 ppm, and a Sulfate to Chloride ratio of 1.3.

This was a fairly standard brew day, no major deviations from my standard process. All the water and acid volumes, salt weights, and boil additions were used as described in the recipe. I mashed in with my strike water at 164.8°F and hit my 152°F target on the nose. My measured pH was 5.55 pH so I added an additional 2.2 mL of lactic acid to bring the pH down to 5.36 pH. I combined my first and second wort runnings in the kettle for a pre boil of 7.75 gal @1.040 SG. After the 90 minute boil my gravity was a touch higher than desired at 1.050 so I added 1.5 qt of tap water to bring the OG down to 1.047. I ran 2.75 gallons of wort into each 3 gallon Better Bottle and pitched an estimated 124 billion cells of WLP090 in each for approximately 1.0 billion/mL/°P (hybrid rate). The carboys were held at 64°F for 4 days before I bumped them up to 72°F to finish off for another week or so. On April 8th I took a FG reading for each carboy and they were identical at 1.007, a bit lower than the target 1.009 but still delicious. I measured out 1 oz of whole Kona coffee beans and tossed it into the carboy to sit for 24 hrs. The next evening I took a sample using a thief and was pleasantly surprised at the balance of coffee and malt in the beer. The coffee aroma and flavour were undeniably present (and delicious) but you could still taste the light bready flavour of the base beer, perfect balance for a specialty beer. I racked both Better Bottles into 2.5 gallon kegs and set them to carb up over a week or so. 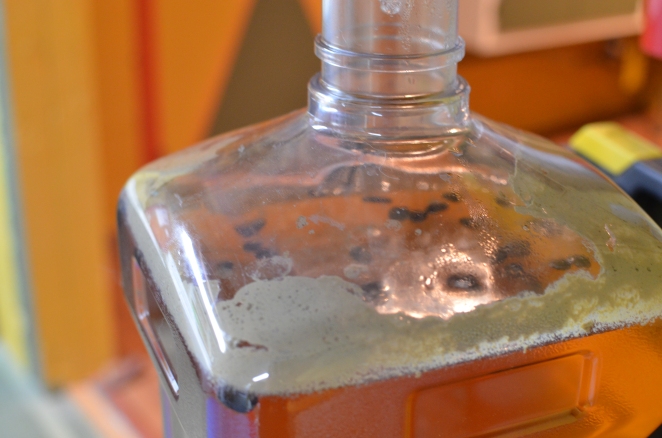 In an effort to improve the perception my readers can get of my beers I have added a more structured tasting section in my recipe posts. I will follow the standard five step model, however I will try to stick to standard beer vocabulary and structured qualitative+quantitative descriptors like I would when judging a BJCP competition. I find it hard to visualize a beer when vague terms like “nice”, “good” are used or subjective terms.

Overall: A well balanced specialty beer with high drinkability. The beer could support a bit more coffee flavour, and a touch more sweetness in the finish.

I am very happy with how this beer turned out and I recently re-brewed to serve at an event at the end of May. I have decided to up the coffee addition to 2.5 oz, which is only 1/4 oz more per 2.5 gallons than I did in this batch. The reason for that is that the coffee started to fade after a few weeks and I want to play with the intensity to adjust for this.